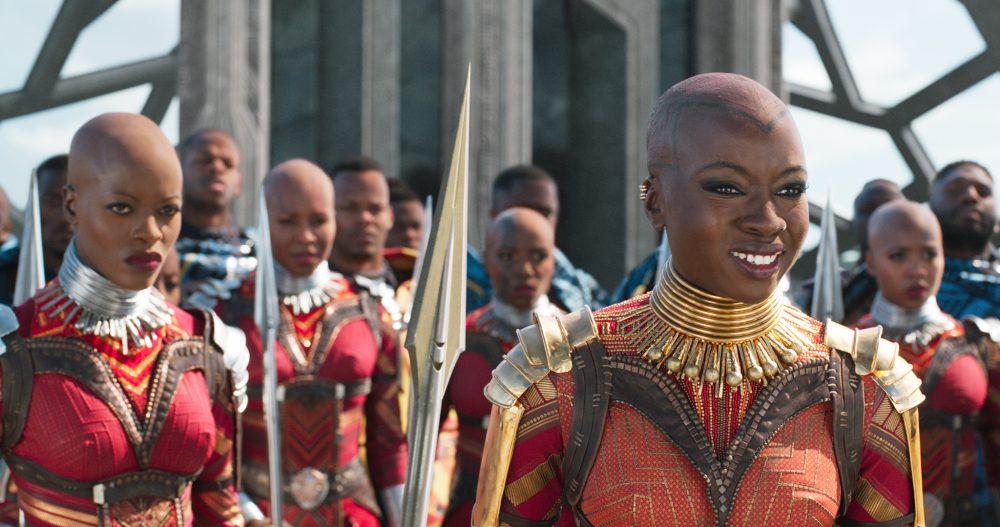 The independent and technologically advanced nation of Wakanda in Black Panther might be fictitious and spark lots of debate, but its women are very real. We all know them; just look in the mirror. Like us, they’re smart, principled, protective, witty, fierce and fly — not to mention unapologetically black or, more to the point, unapologetically African. Here are five who stand out and helped Black Panther set global records over the weekend by earning $361 million at box offices worldwide, according to comScore. 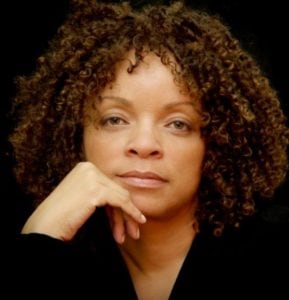 You’ve seen her work everywhere since the late ’80s — from Malcolm X to Being Mary Jane. For Black Panther, acclaimed costume designer Ruth Carter went to the Motherland, weaving history and Afro-futurism into her creations.

She also drew inspiration for the roughly thousand costumes from fashion designers of African descent, such as Duro Olowu (Nigeria) and Oswald Boateng (Ghana).

“It was great to do something so wonderful and different,” Carter said during an advance screening in Washington, D.C.

“All I’ve ever wanted to do was to tell good stories,” Carter says of her designs. “I feel honored to have the career that I’ve had.”

Historical References: A blend of influences from all over Africa that work without being stereotypical or watered down — the Dogon, Tuareg, Maasai, Ndebele, Himba, Zulu and Dinka. “She had such attention to detail,” Angela Bassett said, down to the Okavango triangles influenced by a river delta in northern Botswana that are embossed on the Black Panther’s suit or the symbols on the Dora Milaje’s tights.

A design to fit Princess Shuri’s role as minister of technology for Wakanda.

Pleasant surprises: Carter has been humbled to see that her designs have influenced what people wear to go see Black Panther, whether they’re paying homage to Senegal or Mexico.

Design Dossier: Carter grew up in an artistic family in Springfield, Massachusetts. After designing for plays and everything at Hampton University, she started her career with the Santa Fe Opera and the L.A. Theater Center, where she met and then joined new filmmaker Spike Lee. 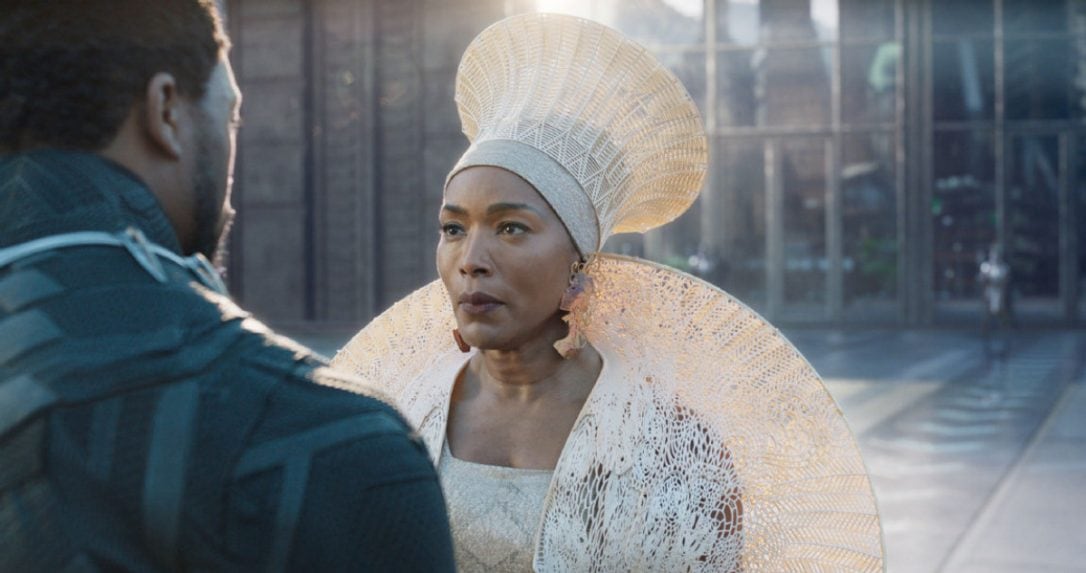 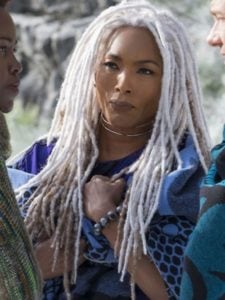 She’s played Rosa Parks, Betty Shabazz, Coretta Scott King, Tina Turner and now a queen mother with regal crowns and locks who looks too young to have a son who’s a king and super-hero. Fit and toned, Angela Bassett is pushing 60 in a good way, balancing her personal life with an extensive body of work.

Bassett describes Black Panther as monumental and historic. While many cast members said they were honored to work with her, Bassett singles them out for praise.

“It was like a family coming together,” she said of the cast. “They came with love, and they also came with great talent and professionalism.”

She also welcomed Ryan Coogler’s inclusive style of directing, asking “Are you good with this?” or “Does this work for you?”

“I learned a lot from him,” she said.

Family Life: She’s married to actor Courtney B. Vance, whom she met when they were MFA students at the Yale School of Drama. They have 12-year-old twins, a daughter and son.

Range: From Marie Laveau in American Horror Story to a police officer in 9-1-1.

Credits: Malcolm X, Notorious, The Rosa Parks Story, Jumping the Broom, Waiting to Exhale, The Score, How Stella Got Her Groove Back, Chi-Raq, Olympus Has Fallen, What’s Love Got to Do With It? 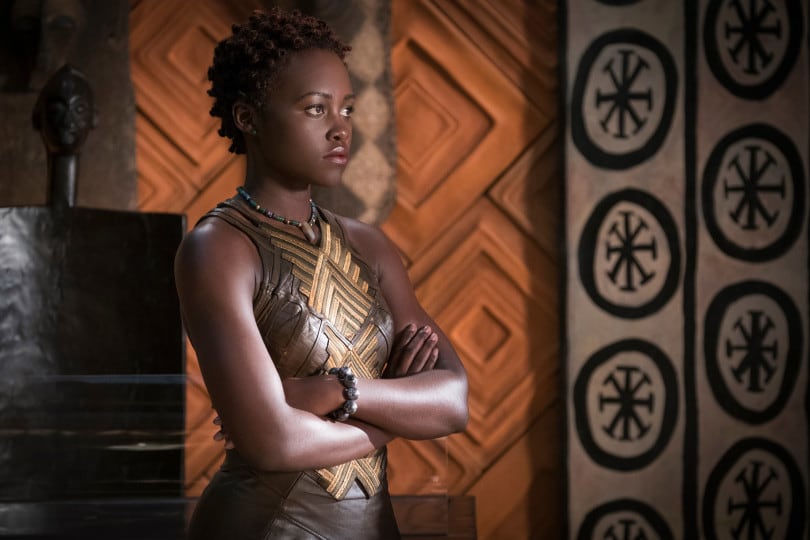 3. Lupita Nyong’o as Nakia, a Woman of Conviction

Nakia, as portrayed by Lupita Nyong’o, can make the Black Panther freeze in his tracks and render him speechless. Although she’s just as smitten, nothing will stand in the way of her mission to help the world’s less fortunate.

She is also willing to fight to the death to defend Wakanda, which required Nyong’o to get extra physical to play this role. “Nakia is like, by any means necessary.”

“The stunt training was intense,” Nyong’o says. “I got my ass kicked.” Still, she had fun in fight scenes that called for a mix of judo, jujitsu, Filipino martial arts, capoeira and Silat.

Like her friend and fellow actor Dana Gurira of Zimbabwe, she believes that Black Panther does Africa justice. Nyong’o grew up in Ratta, a village near Kisumu in western Kenya. She was in born Mexico City while her father was a visiting lecturer in political science there.

“It was deeply important, because not often do we get to see African nations portrayed in such large-budget movies,” she said.  “This movie has the potential to really shift popular culture and shift people’s understanding of what African diversity looks like.”

4. Danai Gurira as a General Who Does Not Play 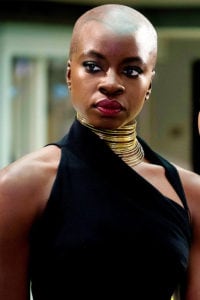 General Okoye (Danai Gurira) during a trip to the United Nations.

If you think Dana Gurira was lethal with the katana in The Walking Dead, check out her skills as Okoye in Black Panther. As general of the Dora Milaje (top photo), she leads an army of women who are fiercely loyal to the throne — similar to warriors in the kingdom of Dahomey, which now covers parts of Benin and Togo.

Authenticity in Black Panther was “extremely important” to Gurira, who was born in Grinnell, Iowa, and grew up in Zimbabwe after her parents returned home when she was 5 years old. “I wanted to know what the treatment would be … how that would look and feel.”

“It was exciting to be a part of it.”

Namesake: Danai means “to love one another” in Shona. Jekesai, her middle name, means “to illuminate.”

Drama Queen: Gurira is also an award-winning playwright. Her plays include In the Continuum, The Convert, Familiar and Eclipsed, which featured her friend Lupita Nyong’o during its Broadway run.

Credits: Mother of George, All Eyez on Me, Restless City, My Soul to Take, The Visitor, Treme, Law & Order, The Walking Dead

As Princess Shuri, Letitia Wright doesn’t just steal some of the Black Panther’s shine; she creates it.

It’s not enough to say that Shuri is to T’Challa what Q is to James Bond. After all, she serves as Wakanda’s minister of technology. In a challenge for the throne, the Jabari leader scoffs at her age. Haters gonna hate, but they know not to sleep on the Black Panther’s little sister.

Shuri’s talent, wit and confidence not only make her a fan favorite in the Disney/Marvel blockbuster, but also an inspiration for young people everywhere. 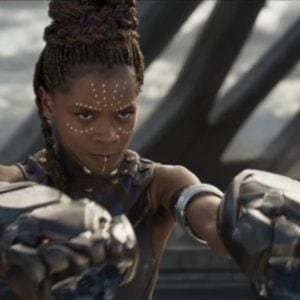 Princess Shuri using one of her inventions to protect Wakanda.

“I’m just honored to play Shuri,” Wright says. “She wants to use her mind to create technology and help her country.”

“I really loved Shuri’s set,” she adds. “I didn’t want to leave when I was there.”

Roots: The 24-year-old was born in Georgetown, Guyana, and grew up in London

Lasting Impression: Wright hopes that her character serves as a STEM role model (science, technology, engineering and math — or STEAM with the arts). “That’s a really dope thing,” Wright says.

Credits: The Commuter, Urban Hymn, Cake and TV series such as Black Mirror, Dr. Who, Humans, Banana and Cucumber.

What’s next? Avengers: Infinity War, Ready Player One and probably anything she wants.

6 Ways to Get the Best From Your Doctor 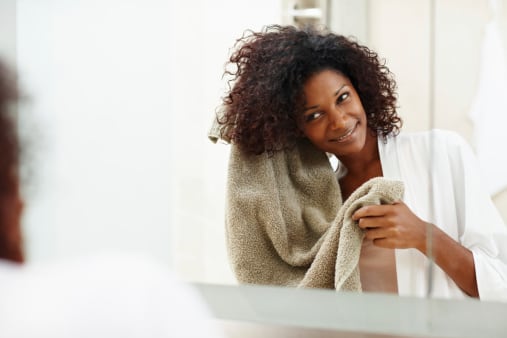 Natural Treats to Pamper Your Hair at Home